Are you giving your gilts the right start to a productive life? 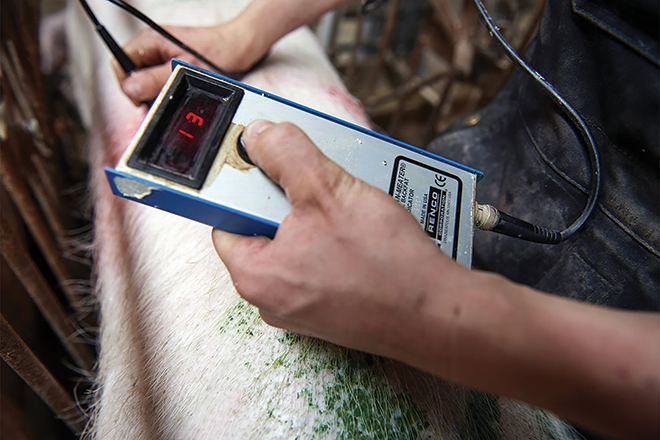 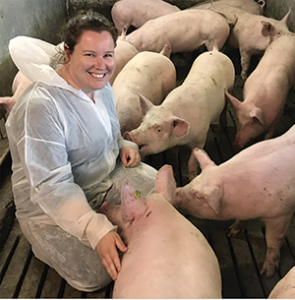 The author with some inquisitive gilts.

THE proper preparation of the gilt is the key to her successful integration in the herd for both longevity and productivity. A trend seems to be appearing in Denmark that gilts are being fed ‘too well’ and subsequently going into the mating unit with too little back fat coverage and paying for it later on, with the term being they are ‘thin-fat’.

That is, from their body condition it is assumed they are in the correct condition for mating, but are actually too heavy and too lean.
It is common in Denmark to house young gilts as you would slaughter pigs, especially in the quarantine unit upon receiving them from the breeding supplier.

As a result, it is also common to feed them with the same finisher diet, which is where the problem begins. A common misconception is the additional protein requirements will benefit the gilt, giving her an ‘extra’ good start to life, however, it is actually the opposite, costing the farm both in an expensive diet for the extra protein and the drop in reproductive capacity of the gilts following their first parity.

The DanBred genotype has been selected for lean meat deposition for many years, which is ideal for the slaughter pig, however, requires management for the breeding animal. Restricted feeding is always the recommended strategy for DanBred gilts to prevent too high a growth rate, with the only exception being when she is flushed seven to 10 days prior to insemination.

Feeding too much protein in the diet will mean she is laying down this extra protein as muscle rather than fat, which she needs for body condition at her first mating and subsequent lactation. The current DanBred recommendations are gilts should be between 12-15mm and 130-150kg at their first mating.

This should be when they are 230-250 days old and at their second or third heat. If they have less fat coverage at the first mating, their chance is significantly increased that they will be removed from the herd at parity 2 or 3, costing the business money, as sows are typically not profitable until their third parity.

It is not enough to rely on a visual body condition score alone as an indicator of the fat coverage in any animal – particularly in the gilt. If you cannot measure it, it cannot be managed! Back fat depth is commonly measured in Danish sow herds via a small handheld reader as a way to assign the sows to the correct gestation feeding curve, and is beginning to be used more in gilt preparation.

The measurement should be taken at the P2 site, which is 7cm from the spine at the last rib. With the correct feeding adjustment, the herd can see an increase of 1mm of fat coverage in four weeks – so results can be seen quite quickly. To have high longevity and litter size, gilts need to be managed from when they are selected to be in the correct body condition at their first mating.

This is easily achieved by ensuring they are on the correct feeding curve and regularly measuring the backfat depth. Sows should be kept in the herd until at least parity 6 and the only way that will happen is if they are set up correctly from the beginning.