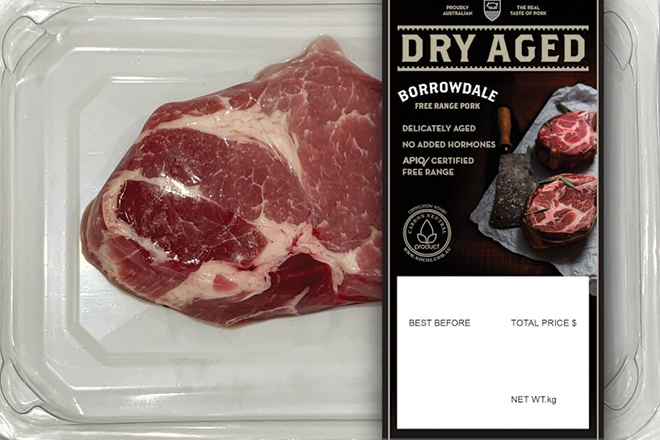 If you’re looking for something a little different for dinner, a new flavour sensation is dry aged pork.

While high-end restaurants and butcheries have been using the method of dry aging pork almost exclusively, the Australian product has made its debut and is now available at supermarkets.

“That dry ageing process – it just adds so much flavour and texture to the product,” Mr Williamson said.

“You lose some moisture in the process but the more moisture you lose, the more intense the flavour becomes.

“You get the best crackling off dry aged pork.

“It’s so easy to get a really good crackle on it.”

Similar to other pork product, dry aged pork costs about $10/kg in a supermarket.

Using a process known as ‘wet ageing’, most pork is vacuum packed soon after butchering.

Dry ageing, on the other hand, requires days or weeks in a clean refrigerated environment with no other food present – the optimal being about two months.

The dry aged pork can be cooked in the same way as other cuts of pork.

“My favourite recipe is a simple roast,” Mr Williamson said.

“Season it really well, roast it and serve it up with your favourite vegetables.

Australian Pork Limited chief executive officer Margo Andrae said the release of the product was timely, with people experimenting more in the kitchen.

When asked about suppliers, she said, “At this stage, it’s only Borrowdale Free Range Pork farm in Queensland, but we’re expecting more producers to come online, given its success.

“At this stage it’s still niche.

“We hope to see further uptake by more supermarkets of dry aged pork in the future, as consumers become more confident cooking new products at home.”