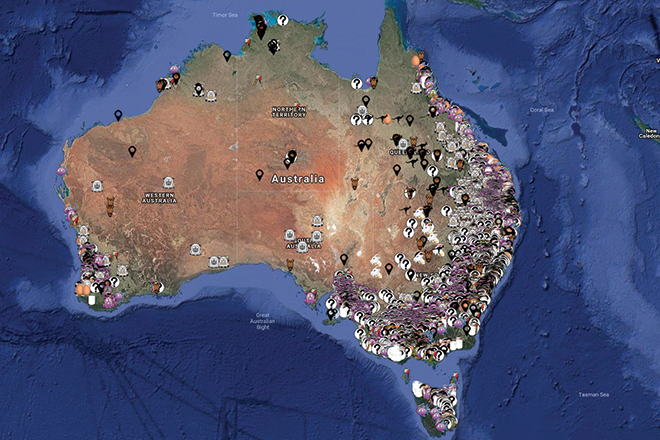 AUSTRALIAN farming families are under siege from a malicious social media campaign run by an extreme anti-farm group.

According to its website, Aussie Farms’ ‘core value’ is a belief that animals should not be owned for human purposes.The Facebook page links to a map with the details of hundreds of farmers implying a connection to animal cruelty and urging people to gather images, videos and other documents in relation to the addresses revealed.

National Farmers’ Federation president Fiona Simson said the implications could be dire and has demanded Facebook close the page promoting the map immediately and for the group to be stripped of its charity status. “Farmers’ privacy, their right to farm and most disturbingly, their safety and that of their families and animals, are at risk,” Ms Simson said.

“Australian farmers have had enough and we will not stand by and watch attempts to destroy farms, families and rural communities.”
Ms Simson said the NFF had fielded calls from farmers who had been included on the map, in some instances who were represented as running businesses that in fact, they do not.

“They are rightly distressed that their name has incorrectly been linked to ‘animal cruelty’,” Ms Simson said. “They are extremely anxious and very angry that their workplace, and their home, has become the target of extreme and dangerous activities.” Aussie Farms, unbelievably, a registered charity, has been linked to a number of trespass incidents, including an incident in December where 55 protesters forced their way into an abattoir in Nhill, Victoria.

“Their agenda is simple and straightforward: they want to see an end to farms, and that means an end to many farmers and the contribution they make,” Ms Simson said. The map comes only days after the ‘dark arts’ of Animals Australia were revealed, with allegations the group paid ship workers to capture footage aboard live export vessels.

“Almost every day, we’re seeing examples of activists accessing farms and businesses without permission, seeking to disrupt the work our farmers do,” Ms Simson said. “These types of stunts risk human and animal wellbeing and are deeply offensive.
“The presence of unapproved people in farm environments has the potential to spread bacteria and disease, which could impact the whole food chain, not to mention the trade implications.

“It’s important to remember that farms are also family homes.” Ms Simson said the NFF had called on Facebook to take the page down immediately. The charitable status of the group must be retracted by the Australian Charities and Not-for-Profits Commission.
Their business model is to openly flout Australia’s laws to undermine farming and agriculture in Australia.

“We have spoken with both the Minister and Shadow Minister for Agriculture, who have condemned the group’s behaviours and objectives,” Ms Simson said. “I will also write to the police in each state and territory, alerting them to the ‘library’ of imagery on the Aussie Farms website, questioning how the material was collected.”

Ms Simson said the NFF is seeking legal counsel on the implied link the map makes to the farmers represented and animal cruelty; and regarding any potential infringement of privacy and trespass laws. “As a matter of priority, we will be advocating for laws that guarantee farmers’ freedom to farm,” she said. “Laws that carry harsh penalties for those who seek to impede this freedom.”