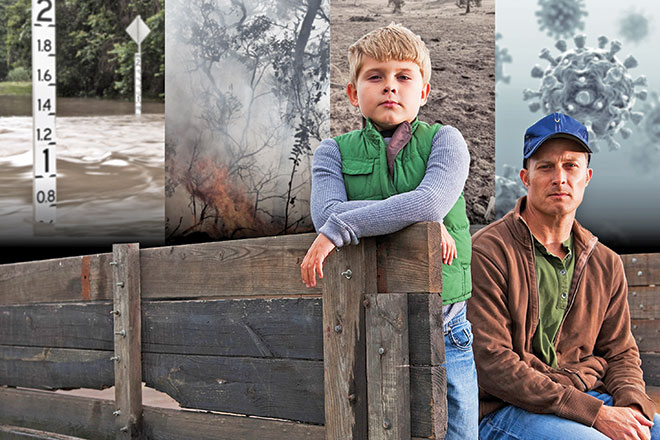 Even the most resilient people need help and support

CONSIDERING the vastness of Australia and the number of people who live in regional and rural areas, it’s a concerning fact that remoteness is a major risk factor contributing to mental health issues and suicide, with the suicide rates being 60 percent higher than rates in major cities.

In a continued effort to raise awareness of mental health in rural and regional Australia, leading animal health business Zoetis has partnered with Beyond Blue to support mental health initiatives and reduce the stigma around mental health.

Over the past six years, Zoetis has raised $600,000 for the Beyond Blue Support Service by donating $5 from each sale of the company’s livestock, pig and poultry vaccines and drenches.

“We are proud to be supporting Beyond Blue and the important work they do.

“The money raised goes directly to the Beyond Blue Support Service to continue helping people living in remote areas.

“To date, thanks to Zoetis’ donation, over 12,000 people have been able to get the support they need through the service.

“Together we have made strong progress in supporting the mental health and wellbeing of those who live in rural Australia, and we are passionate about helping again this year.”

Derek Schoen, a farmer for more than 36 years, is a beef, grain and hay producer in Corowa, NSW.

Mr Schoen is a member and former president of the NSW Farmers Association, a former deputy mayor of Corowa Shire Council, NSW Rural Assistance Authority Board director, chair of Murray Local Land Services and is on Beyond Blue’s Board of Directors, providing a wealth of experience on rural life.

“The farming community has endured many challenges over the years,” Mr Schoen said.

“Through droughts, floods, bushfires and on-going COVID-19 related issues, rural Australia and country people are stoic and display considerable courage, however the impact on mental health has been significant for many.”

With many farmers, small business owners, workers and parents feeling the pressure, it is vital that people receive mental health support as early as possible to prevent their issues leading to more serious mental health conditions.

Financial hardship, isolation and stigma can take a toll on those in distress, placing their mental health at risk.

It is important to remember that depression and anxiety are common conditions, not weaknesses, and with the right treatment, most people can recover.

“The good news is that most of us will be able to cope very well with challenges as they arise – we will use our normal resources, our strengths, networks and the support that we have around us from family, friends and loved ones,” Mr Schoen said.

“People in rural Australia are known for their resilience in times of crisis, but even the most resilient among us need extra support at times.

“We want everyone to know that support is available and encourage people to seek advice.

“Asking for support is a sign of strength, not weakness.”

“It’s important to make looking after ourselves a priority and set goals for sleep, exercise and ‘me’ time,” Ms O’Brien said.

“Maintaining social connections, keeping in touch with friends and family, and being part of a community provides a supportive network.

“Also, understanding which tools and strategies work well for you in tough times and reaching out for that extra support when you need it are really important.”

Feeling connected with others can reduce stress and build resilience.

The main thing for everyone to know is that, “You are not alone, and you don’t have to work things out by yourself,” Ms O’Brien said.

“Whatever the reason, Beyond Blue wants people to know that no problem is too big or small to reach out.

“Sometimes, just talking to someone can make a difference.”

Eddie Sloan is a former farmer who worked in the agricultural industry at management level after having to leave the family farm in Western Australia in the early 1990s.

A change of direction in his career saw Eddie follow a path into the disability sector, working with and supporting people with disabilities into meaningful and lasting jobs in Kingaroy Queensland.

Eddie grew up as a third-generation farmer in Western Australia and after losing his father in his late teens, he suddenly found himself with a lot more responsibility, managing the farm on his own.

With the added pressure, he first started experiencing issues with his mental health in his twenties but became good at masking how he felt and used alcohol as a coping mechanism.

It was following several hospitalisations after attempting to take his own life and receiving support and treatment that, at the age of 45, Eddie accepted he had an illness and realised it could be managed.

Eddie says resilience is an important part of his mental health journey that keeps him putting one foot in front of another.

“At one stage where I was struggling to get up each day and get out of the house, I would tap into my own self-reliance and inner strength to keep going in small ways,” Eddie said.

“Being resilient meant taking those small steps, keeping going, connecting with family and knowing things would get easier.

“I want people to know there is always hope, and that early detection and management is an important step towards recovery, and in doing so we find our resilience within.”

The Beyond Blue Support Service offers free and immediate counselling, advice and referrals via phone, webchat or email.

In addition to the support service, Beyond Blue has resources and information online at beyondblue.org.au, including online forums that offer peer support in a safe, moderated setting.

People can support the Zoetis initiative from July 18 to October 31, 2022.

For every animal health product sold by Zoetis, the company will donate $5, up to $100,000, to Beyond Blue.

For more information on how you can help Zoetis to raise vital funds to support mental health in rural communities through its partnership with Beyond Blue, visit zoetis.com.au

For more information about depression and anxiety, visit beyondblue.org.au.