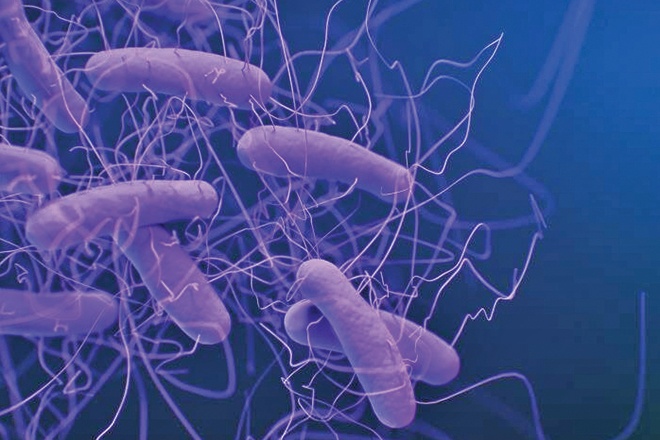 A STUDY investigating samples of the superbug clostridioides difficile across 14 pig farms in Denmark finds the sharing of multiple antibiotic-resistance genes between pigs and human patients, providing evidence that animal to human – zoonotic – transmission is possible.

The study – by Dr Semeh Bejaoui and colleagues from the University of Copenhagen and Statens Serum Institut in Denmark – was presented at this year’s European Congress of Clinical Microbiology and Infectious Diseases held in Lisbon, Portugal on April 23-26.

“Our finding of multiple and shared resistance genes indicates that c difficile is a reservoir of antimicrobial resistance genes that can be exchanged between animals and humans,” Dr Bejaoui said.

“This alarming discovery suggests that resistance to antibiotics can spread more widely than previously thought and confirms links in the resistance chain leading from farm animals to humans.”

Clostridioides difficile is a bacterium that infects the human gut and is resistant to all but three current antibiotics.

Some strains contain genes that allow them to produce toxins that can cause damaging inflammation in the gut, leading to life-threatening diarrhoea, mostly in the elderly and hospitalised patients who have been treated with antibiotics.

C difficile is considered one of the biggest antibiotic resistance threats in developed countries, causing an estimated 223,900 infections and 12,800 deaths in the US in 2017, at a healthcare cost of more than $A1.43 billion.A hypervirulent strain of c difficile – ribotype 078 or RT078, that can cause more serious disease and its main sequence type 11 – is associated with a rising number of infections in the community in young and healthy individuals.

Farm animals have recently been identified as RT078 reservoirs.

In this study, Danish scientists investigated the prevalence of difficile strains in pigs and the potential for zoonotic spread of antimicrobial resistance genes by comparing to clinical isolates from Danish hospital patients.

Stool samples were collected from 514 pigs in two batches from farms across Denmark between 2020 and 2021.

Batch A included 330 samples from sows, piglets and slaughter pigs from 14 farms in 2020.

The 184 samples in batch B were collected during slaughtering in 2021. Samples were screened for the presence of clostridioides difficile and genetic sequencing was used to identify whether they harboured toxin and drug resistance genes.

Genome sequencing was also used to compare the c difficile isolates from the pig samples to 934 isolates collected from patients with c difficile infection over the same period.

Further analyses of 40 samples – batch A=33, batch B=7 – found that c difficile was more common in piglets and sows than slaughter pigs.

The authors speculate that this may be due to the difference in age between piglets and adult pigs — with the younger pigs having a microbiota composition that makes them more susceptible to a successful colonisation.

In total, 13 sequence types found in animals matched those found in patient stool samples.
ST11, an animal-associated strain, was the most common – pig=21, human=270.

In sixteen cases, ST11 strains in humans and animals were identical.

All isolates from animals were positive for the toxin genes and 10 were also hypervirulent, with an even greater capacity to cause disease.
In total, 38 isolates from the animals contained at least one resistance gene – and overall, resistance was predicted for seven classes of antibiotics, of which the most common were macrolides, beta-lactams, aminoglycosides and vancomycin – which are important for treating severe bacterial infections.

“The overuse of antibiotics in human medicine and as cheap production tools on farms is undoing our ability to cure bacterial infections,” Dr Bejaoui said.

“Of particular concern is the large reservoir of genes conferring resistance to aminoglycosides, a class of antibiotics to which c difficile is intrinsically resistant – they are not needed for resistance in this species.

“C difficile thus plays a role in spreading these genes to other susceptible species.

“This study provides more evidence on the evolutionary pressure connected with the use of antimicrobials in animal husbandry, which selects for dangerously resistant human pathogens.

“This highlights the importance of adopting a more comprehensive approach for the management of c difficile infection, in order to consider all possible routes of dissemination.”
Despite the important findings, the authors note several limitations, including that they were unable to determine the direction of the transmission.

“The fact that some of the strains in both human and animal isolates were identical suggests that they could be shared between groups but until we perform deeper phylogenetic analyses, we cannot determine the direction of the transmission – which could also be bidirectional, with the bacteria being continuously exchanged and expanded in the community and farms,” Dr Bejaoui said.