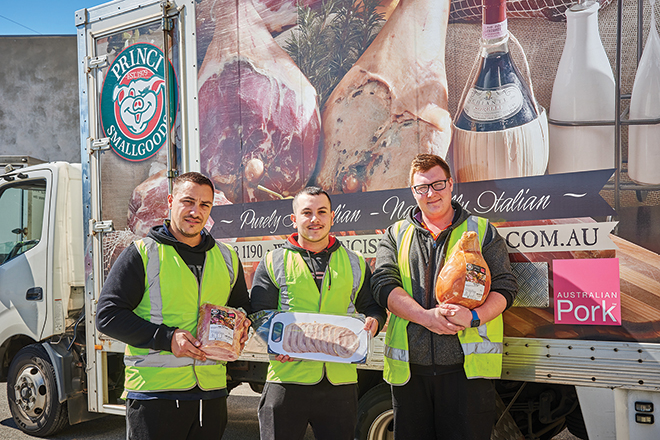 IN what could be deemed Australia’s tastiest competition, Princi Smallgoods in Perth have been named as producing the best bacon in the nation, just in time for International Bacon Day on August 31.

The nationally available full rasher bacon, made from 100 percent Australian pork, was the star of the Australian PorkMark Bacon Awards and beat out over 140 entries from across the country. Director, Pino Princi says the secret to Princi’s success is their family recipe and the locally sourced pork they use to produce the winning bacon.

“The story of Princi bacon began over five decades ago and our recipe has travelled from Italy to Australia. What really sets our bacon apart though, I believe, is the quality of the pork that we begin with,” said Princi. “Australian bacon is iconic and to be recognised for producing the best in the nation – we’re really proud of that.”

Southlands Quality Meats in Canberra took out first place honours in the Short Cut category, followed by Westridge Meats from Toowomba in Queensland in second spot. Loveday’s Quality Meats on the Gold Coast and Eurostyle Smallgoods in Perth were named equal third with their short cut bacons.

In the Full Rasher category, Gray’s Modern Meat Mart in Toowoomba was announced second place to Princi Smallgoods and Griffith Butchery in Canberra, third. Australian Pork Limited Marketing Communications Manager, Mitch Edwards says the competition shines a light on smallgoods makers who are using 100 percent Australian pork to produce their bacon, which is great news for both pig farmers and bacon-lovers.

“Bacon is an Aussie household staple but there’s a high chance the family favourite that shoppers are selecting isn’t made with Australian pork”, said Edwards. “Many people are surprised to learn that 80 percent of bacon sold in Australia is made using imported pork. Aussie bacon meets our high safety standards and celebrates fresh, quality, local ingredients.

“If you want to support Aussie pig farmers, by buying bacon made from 100 percent Australian pork, look for either the pink Australian Pork logo or make sure the bar chart on the country of origin label has a percentage of over 90 percent of Australian ingredients.” The process behind naming these bacons as Australia’s best was fiercely contested, not only by the entrants, but with a spot on the judging panel being a hot ticket.

All entries were judged in their raw and cooked form by a panel of four passionate bacon connoisseurs, Fleischmeister Horst Schurger, chefs Simon Bestley, Adam Moore and Paul McDonald.