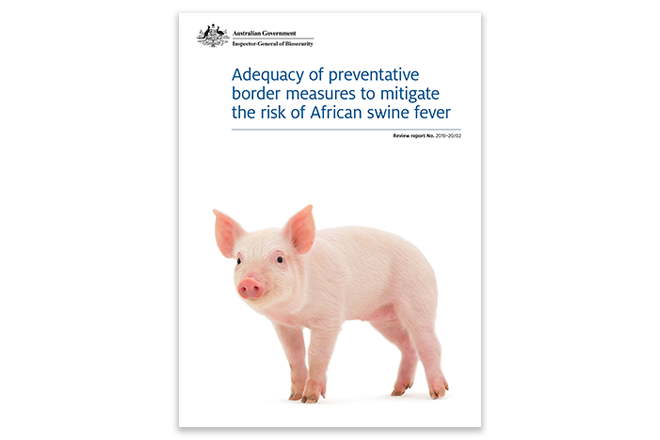 AUSTRALIAN pork producers remain on alert following confirmation in the last week of March that the deadly African swine fever virus caused the deaths of hundreds of pigs in Papua New Guinea.

PNG officials, who confirmed samples from the affected Southern Highlands pigs were sent to Australia and returned positive for ASF, are investigating how the virus spread to the region, including the possibility of transmission via imported canned food. Australian Pork Limited CEO Margo Andrae said the detection of ASF in PNG reinforced the importance of ongoing ASF mitigation work between the pork industry, government and other stakeholders.

“While ASF does not pose human health risks, the deadly virus would absolutely devastate Australia’s pork industry if it arrived here,” she said. “The potential national economic impact from an ASF incursion in Australia is estimated to be more than $2 billion.
“There is no cure for ASF and millions of Australian pigs would be at risk if the disease reached our country.

“That would devastate pork producers and Australian fresh pork supplies, and seriously jeopardise the wellbeing of the 36,000 Australians employed in our industry.” Ms Andrae said ASF represented potentially the biggest animal disease event the world has ever seen, having already killed hundreds of millions of pigs across Asia and Europe.

“ASF has been confirmed in PNG, Indonesia and Timor Leste, and we are concerned of its potential spread to the Pacific region.
“The battle is being fought across international borders and we welcome the Federal Government’s offer to assist PNG to contain the virus. “Even with current travel restrictions, there is no room for complacency in terms of ASF, particularly given international postal services remain operational.

“That is why the installation of two new 3D x-ray machines at the Sydney and Melbourne mail centres, as part of the government’s $66.6 million ASF-response package, is such an important part of our defence. “Biosecurity measures in the Torres Strait have been strengthened as a result of COVID-19 and the government is reviewing those measures to reflect the risk ASF in PNG poses to Australia.”

Confirmation of ASF in PNG coincides with the Inspector-General of Biosecurity’s release of the updated report on the adequacy of preventative border measures to mitigate the risk of ASF. “A timely recommendation in the report is the inclusion of additional criteria in risk assessment for flights from ASF-affected countries, including a focus on seasonal farm workers,” Ms Andrae said.
“We cannot afford any weak links in our defence against ASF.

“All aspects of monitoring at the border are critical, as is the work by producers to strengthen on-farm biosecurity and the cross-agency collaboration being led by National Feral Pig Management Coordinator Dr Heather Channon.” The IGB report is available at igb.gov.au/sites/default/files/documents/asf-review-report.pdf