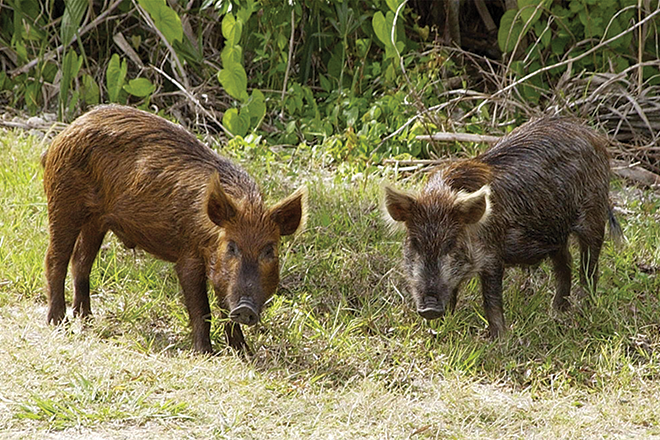 A REPORT published this week by Australian Pork Limited has confirmed that feral pigs are second only to rabbits in terms of their economic impact as an invasive species in Australia. The report is part of the development of the National Feral Pig Action Plan, a $1.4 million federal government initiative which is being managed by APL due to the direct threat feral pigs pose to Australia’s commercial pork industry as potential carriers of African swine fever.

National Feral Pig Management coordinator Dr Heather Channon said, “Feral pigs are one of the most destructive invasive species in Australia, with an estimated national population of up to 24 million spread across 45 percent of the country – some 3.43 million square kilometres. “This report confirms that even conservative modelling indicates feral pigs cause more than $100 million in direct economic costs to the agricultural sector each year.

“They cause losses in productivity through livestock predation, competing for feed, fouling water sources, damaging farm infrastructure, reducing crop yields, spreading invasive weeds and acting as a vector for disease. “The potential cost posed by feral pigs’ ability to act as carriers of endemic and exotic diseases is substantial. “The annual estimated damage bill of $100 million seems to be the tip of the iceberg.”

Dr Channon said that while feral pigs are prolific in Queensland, the Northern Territory and NSW, local populations can be found across the continent, especially near wetlands and other watercourses.
She said analysis is being undertaken by the Australian Bureau of Agricultural Resource Economics and Sciences to estimate the feral pig population’s current distribution and density. “Feral pigs can increase their population by more than 85 percent a year.

“Typically, 55-70 percent of feral pigs need to be culled annually to keep the population size from expanding,” Dr Channon said. “We’re dealing with highly fertile, intelligent animals with a wide-ranging omnivorous diet, which is why feral pig management is such a complex issue for industry and all tiers of government. “The challenge of the National Feral Pig Action Plan is to develop a coordinated, best-practice approach to feral pig management, similar to what the National Wild Dog Action Plan is delivering.

“Effective management of feral pigs will require a well-coordinated approach between all relevant stakeholders and the success of a sustained reduction in damage caused by feral pigs will be contingent upon ongoing control, continued monitoring and cohesive control efforts.” The release of the APL report coincides with the first meeting of the National Feral Pig Action Plan steering group held on July 15 and chaired by experienced agribusiness leader John Maher.

The steering group represents a wide range of stakeholder groups and is guiding the development of a preliminary action plan to be delivered to the federal Department of Agriculture by January 2021.