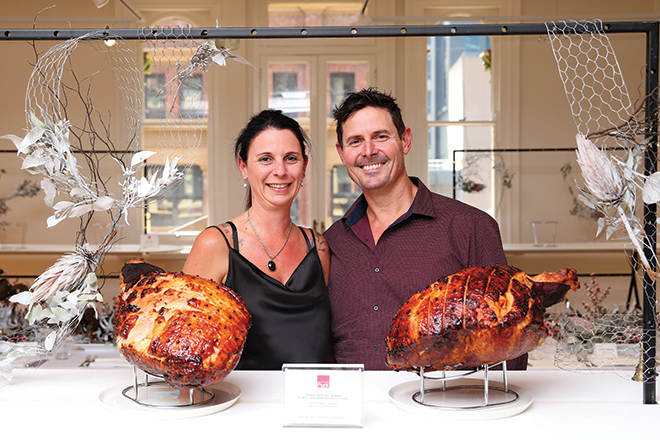 SPEED dating with a difference hit Sydney recently, to help bridge the rural-urban divide and support Aussie farmers. Thirty influential voices and members of the pork industry came together in the iconic Strand Arcade for a festive lunch with a twist.

The quick-fire conversations were a chance to highlight a fact many Aussies don’t know: the majority of ham sold in this country is made from imported pork.
Chef and food personality Manu Feildel attended the event and said it was an opportunity to hear how imported pork was affecting our farmers’ livelihoods, but also celebrate Australian product and producers.

“The problem is consumers will not actively look for hams made from Australian pork if they aren’t aware of the massive amounts of imported pork coming into this country,” Mr Feildel said.
“Our job – as foodies, chefs, industry and media – is to educate them. “Then it’s up to Australians to seek out the high-quality local product. “Especially so on an occasion such as Christmas, when it’s about sharing food with those we love most.”

Australian Pork Limited Marketing Communications Manager Mitch Edwards said Christmas and ham went hand in hand and there were some simple tips to ensure the ham on your Christmas table was 100 percent Australian pork. “The greatest gift you can give an Aussie pig farmer this Christmas is to buy Australian,” he said. “When it comes to ham, if it’s on the bone, then it’s one of our own.
“However, if you’re buying a boneless ham, look for an almost full bar chart on the packaging to be sure your ham is made from 100 percent Australian pork.”

The event was also a chance to showcase excellence, with the winner of the 2019 Australian PorkMark Ham Awards revealed as the bone-in ham from Noosa Meat Centre in Queensland, which beat more than 140 entries. Steve and Stacey Young who created the artisan bone-in ham, made with 100 percent Australian pork, credited their team for the winning ham. “I’m a huge believer in championing Australian and this shows in the final product,” Mr Young said.

“Buying Australian keeps my staff in a job, our farmers in production and to be honest, the pork raised here is perfect – I will always support local breeders.” D’Orsogna’s Australian Jarrah Honey Ham took out the awards’ nationally available category, with the product available in Woolworths year-round. To ensure this important discussion continues, Australian Pork Limited has launched a social media campaign #TheGreatestGift to encourage Australians to support our local pig producers. 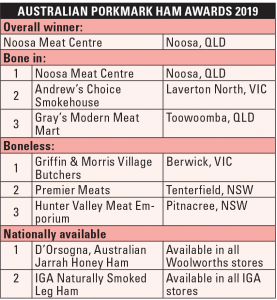