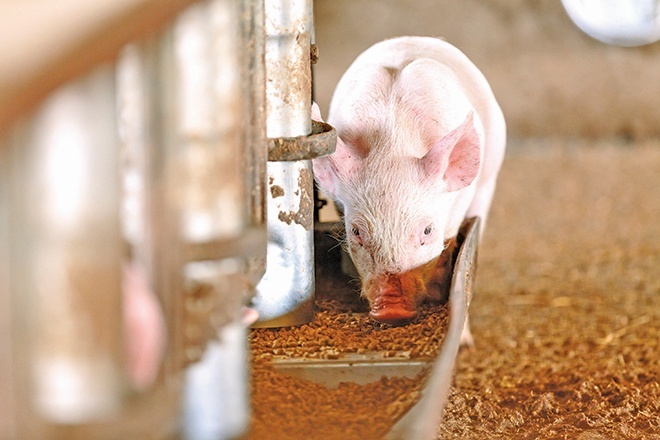 In addition to reducing stress and providing a good environment, it is important weaner pigs have access to a well-balanced diet to support their growth and performance. In recent years, APL has supported research looking at nutritional strategies to promote weaner performance. Each week during May, the APL Update email newsletter was used to promote three different opportunities, outlined below.

Strontium is a trace mineral reported to increase bone volume and density. There is potential for strontium supplementation at low doses to improve performance of growing pigs.

In the trial, we found:

Gilt progeny are born lighter and often do not perform as well as progeny born to multiparous sows. This project included multiple trials that aimed to explore the reasons for this difference in performance and potential dietary interventions, which may help producers enhance progeny performance. One trial explored the effect that larger creep pellet size has on feed intake both before and after weaning.

It is common practice for producers to include excess levels of some amino acids in pig diets to minimise growth variation in pigs. However, previous research has indicated an excess of protein and some amino acids can negatively affect feed intake and growth in weaner pigs.

For technical information on any of these topics, contact Dr Rebecca Athorn at rebecca.athorn@australianpork.com.au

For a copy of the final reports or related factsheets, contact Rachael Bryant at rachael.bryant@australianpork.com.au

The theme for June will be Grower and Finisher Performance.