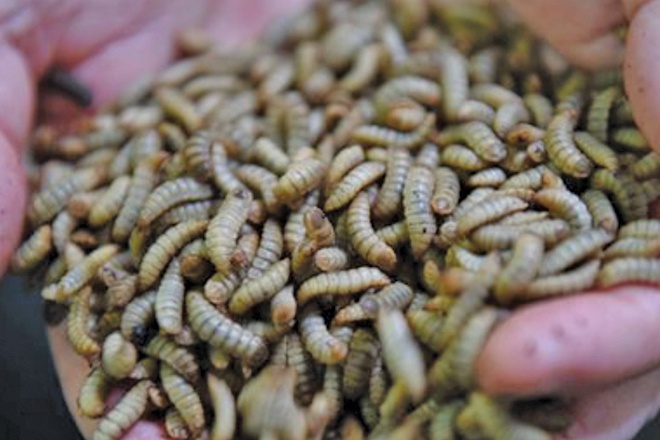 Millions of insect larvae are being used to turn livestock waste, including pork and poultry, into effective and stable fertiliser for food production. The 500,000 pigs grown in Australia annually produce untreated manure that is nutrient rich though is not safe to use on all food crops.

“The soldier fly larvae are a fairly non-select feeder, so they’ll eat anything from kitchen scraps, fruit and vegetable waste, meat waste and even some more problematic waste streams such as manures,” Mr Wheat said.

“The adult part of the fly doesn’t have a requirement to feed – essentially what that means is the larval phase needs to gain as much energy and nutrition as it can to survive through pupation and breeding.

“It’s a bit like a bear going into hibernation.

“That’s what we’re capitalising on at Future Green Solutions is their ferocious eating in converting waste streams into saleable and usable product.”

The larvae’s own manure is a fertiliser product that is stable, dry, organic material called frass, which has a surprising earthy smell. Senior research officer at UWA Daniel Kidd recently discovered the soil-improving benefits of frass in trials on various crops including ryegrass, clover, canola and wheat.

“Certainly, as an organic fertiliser, I think it has great promise,” Mr Kidd said.

At present, 60 percent of the pork industry is powered by energy produced by methane gas collected from effluent ponds. APL chief executive officer Margo Andrae said the remaining manure was left in ponds to dry out and had limited use.

“You can use it for your landscaping, you can use it for regeneration, but what the black soldier fly does is gives us a lot more opportunities for where we can use that, because it’s been processed,” Ms Andrae said.